HEA Beams used in a Skid for Offshore Regasification Plant

While building an off-shore regasification plant in Norway stainless steel structures are used. Because of their special usage the HEA beams have to display special features. And the construction itself also needs a lot of creativity.

Planning the project with HEA beams 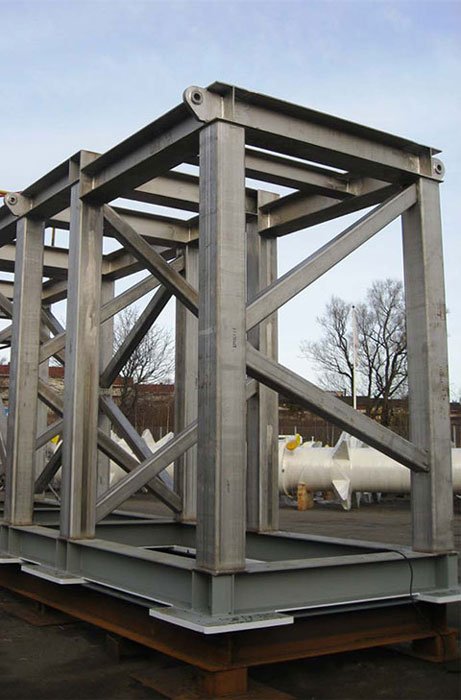 Several skids in stainless steel had to be manufactured for a special project in Norway.
The application was an off-shore regasification plant built on a vessel.
The skids were containing all equipment for the regasification process of LNG (liquified natural gas). Due to the temperature of the processed liquid the material’s choice for the skid had to be stainless steel, as common carbon is not suitable for low temperatures down to -180°C.
So the skids were designed for using stainless steel beams (HEA in the sizes 140; 180 and 300) and square hollow sections (SHS in the sizes 150 and 300).

Because the skid has to be nine meters long, two meters wide and almost five meters high, the sections had to conform to these special lengths.
Especially the HEA300 having a flange width of 300 millimeters was causing lots of non reusable off-cuts that were supposed to be scrapped. According to this we suggested a design review, changing the flange’s width to 295 millimeters with almost zero scrap and significant savings.

The proposal was verified by the engineers and accepted.
In addition to the service fix length and mitre cutting, parts of the beams were supplied having the flanges back-cut at the bar’s ends, simplifying the assembling of the skid on site.
As each section was ready for assembly, they were laser engraved with an identification code that helped to assign the different pieces within the big puzzle.
Additionally stiffening plates for the beams as well as laser cut lifting lugs were supplied loose, completing the package.