After Chernobyl experienced the catastrophe on April 26, 1986 volunteers encased the nuclear power plant in a sarcophagus of concrete and steel. Thirty years later it is newly entombed.

Monument in Chernobyl to commemorate the nuclear catastrophe

This concrete and steel sarcophagus whilst rudimentary, acted to conserve and effectively keep a lid on the radiation. Hence, the sarcophaugs prevents it from entering the atmosphere. This would also enable a radioactive cloud to occur across Europe and beyond as it did when the powerplant first exploded. The sarcophagus in Chernobyl was in danger of collapse. Therefore, it had to be reinforced as recently as a few years ago. If one would not replace the cover, there was a danger of radioactive debris and dust being once more exploded into the atmosphere, which would have been a second catastrophe.

A Giant Project for a New Sarcophagus

Thirty years later, there is a new plan to create a giant stainless steel arch known as  “New Safe Confinement.” This stainless steel arch will slide into place over the reactor. Funded and built by a consortium of global donors, it will create a cap to seal 5.5 tonnes of radioactive material including boric acid, lead and sand along with 220 tonnes of uranium and unstable isotopes and thousands of tonnes of concrete and steel. Containing this level of contamination is undoubtedly a mammoth project and essential task. Overseen by Nicolas Caille, project director for Novarka, the French consortium will manage 2.1 billion euros for this project made in steel, being 110 meters high, 165 meters long, 260 meters wide.

Replacing the old sarcophagus in Chernobyl

The new safe confinement tomb will have many improvements. For example, it will be the largest man-made object to move bounded. Teflon coated tracks will pull it into place. The aim of the New Safe Confinement tomb is to confine solid waste matter within the steel structure. This air hangar style structure will consist of kilometers of stainless steel sections and will have 13 arches and twelve bays.
Tubular steel arches will support the structure and will be clad externally with triple layer sandwich panels. Special warm dry air will circulate in the gap between the outer and inner roof layers to prevent corrosion. Construction of the New Safe Confinement tomb has been ongoing since March 2004. It is designed to support the current object shelter, which forms the sarcophagus over nuclear power reactor 4. Multi-core stranded steel cables will pull the structure forward on tracks. This minimises surrounding disturbance to the soil or water table.

Part of the works will involve dismantling of sections of the original sarcophagus in Chernobyl. They are corroded and unstable. This will future-proof the site and aim to ensure that the NSC will contain any radioactive waste for the next hundred years. As of April 2016, the main structural arches are complete. Completion of the stainless steel sandwich walls is due to be in place by August 2017. Weighing 30,000 tonnes, the NSC roof had to be jacked into place thirty meters in the air. Workers also added a further pair of legs until the structure reached 110 metres high.
Interestingly, the used jacks were originally intended to raise the nuclear submarine Kursk from its watery grave on the Barents Sea in 2001. 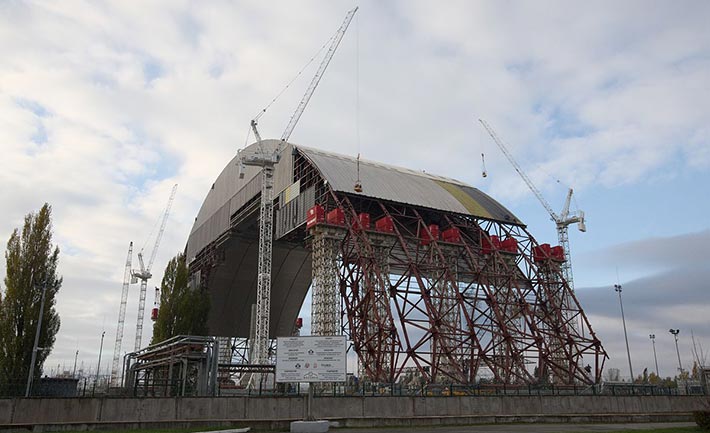 The co-ordination to ensure that the process goes smoothly is crucial. If traction is greater on one side than the other, the entire structure is under greater pressure. This is then causing twisting, straining or buckling which would weaken the structure. Undeniably, the greatest issue to complete the project will be the human resources. Just twelve minutes working at the NSC can give a worker their annual exposure level. Clearly, the cost of the project has been quite phenomenal. However, there is no comparison to the costs which would result, if the original sarcophagus structure were to fail.

Also Montanstahl took part in this huge project. Some quantities of standard structural stainless steel sections were produced in Switzerland. Thanks to Montanstahl’s laser welding technique, it was possible to produce and supply in very short time stainless steel beams and channels in lengths greater than 12.4 meters.